Nancy Hodari is a lawyer and the owner of Equilibrium Studio, the first licensed STOTT PILATES training and certification center in the United States.

Born in suburban Detroit and baptized a Catholic, she declared herself an atheist at 12 years, and converted to Reform Judaism some 18 years later.

Raised with four brothers NH played with boys out of necessity, eschewed girly stuff, and paid the price for her lack of caution.

Examples of stupid behavior: at age 5 her brothers dared her to walk across the monkey bars rather than crawl across with her hands resulting in a concussion; water skied with a ten year old brother driving the boat resulting in being run over; agreeing to be the puck in a game of indoor hockey; later in young adulthood riding a motorcycle in the Pyrenees on a raining day, wiping out, and ending up in a French hospital; skiing out of bounds in Aspen into the expert black area with the actual ability of an average intermediate skier resulting in a broken back.

NH studied political science at the University of Michigan but mostly went to protests in Ann Arbor and surrounding areas. Her love of photography and politics led her to study writing at Goddard College in Vermont where she combined her love of political protests with photo-journalistic assignments. She describes a pivotal moment when she did a photo essay on a massive anti-nuclear proliferation march in New York City on July 12, 1982. Photo of demonstrators taken at 47th Street and Third Ave. She realized she was no Margaret Bourke-White and  decided to go to Law School. 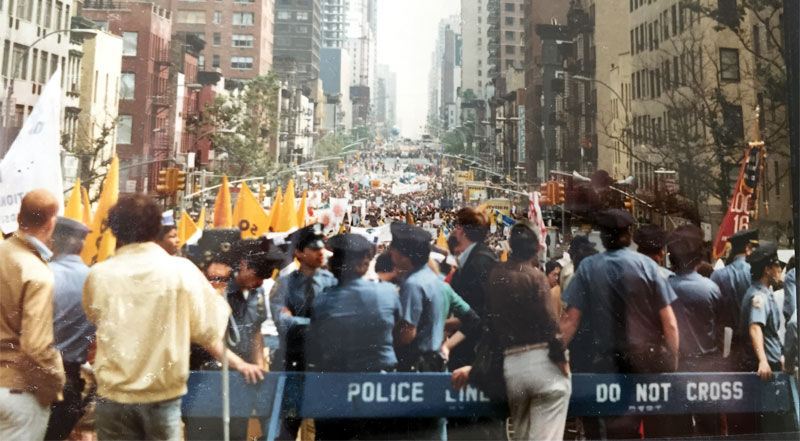 Her employment history includes working as a legal clerk, a lawyer, a teacher of Women’s Studies at a Community College , (Women and Health Care-A Political Perspective), Duncan Donuts, a Visual Learning Therapist at an inner city clinic for children with learning disabilities related to eyesight; most common therapy was teaching children how to crawl to establish spacial relationships; the crawling saved her life when the windows were shattered by gunfire; emergency medical technician in training where she rode in orange EMT trucks in Detroit and was privy to a world she could not have imagined. Remembers entering a lower level dingy drug house in the Cass Corridor where she was faced with an overdosed and very dead person surrounded by a gang of friends demanding she save his life.

In 1995 NH decided to climb Kilimanjaro, so began a relentless training regime not suited to her already injured spine, and ended up with a nerve injury and a third back surgery.

Fast forward to the surgeons famous words; the surgery was perfect I got a beautiful result but you will walk with a brace because of a severe permanent drop foot.

Traditional physical therapy bored and frustrated NH and through the internet she discovered a rehabilitative exercise method called pilates. At the time there were only two practitioners in the state of Michigan seeing clients in their basements. And she sought their help. Eventually she found a pilates guru in NY City who gave her the strength and tools to walk without the brace and she transformed her new found passion-pilates-into a new career.

Serendipity reigned. STOTT PILATES, an international pilates training company in Toronto was expanding their licensed studio program into the United States and she was given the first US license for a training and certification center. Equilibrium opened in 1997 and has been training teachers and clients since then.

Equilibrium remains the premiere pilates training studio in the Midwest and the team includes 24 certified Instructors, including 4 who are also Physical Therapists.

Nancy has four children, three step-children, five grandchildren ages 4 and under, nine step grand-children, and four “adopted” high school girls at Harlem Village Academy that she has mentored since they were in the fifth grade and  who graduated college in 2020.

“I think I was one of the first in my generation to espouse serial careers, a common phenomenon among my children’s piers today. An emergency medical technician, a visual therapist, a teacher, a lawyer, a business owner, and sometime in the future I hope to find another career in the food industry. I enjoy writing and eating so I imagine a dream job as a food critique for Grub Street.

Started barrechat.com mainly because she coined and loved the name and how it included almost all conversation.

“Founded Barrechat and invited two friends to join me in rotating the blogging. No one has the discipline to submit regular blogs so am thinking I should focus on food blogging? My favorite barrechat blog was a plea to Mark Zuckerberg to find an additional response button as an alternative to the ubiquitous “like” choice.

From 2009 through 2020  NH divided her time between Detroit and New York City. COVID shut down NYC and NH gave up her aparment.

NH favorite Broadway show before COVID  was The Curious Incident of The Dog in The Night.

In October 2021 NH returned to  NYC and saw four shows, visited four museums, ate at 15 restaurants, and logged a minimum of 15,000 steps a day exploring her favorite city.

A typical suburban Detroit day in 2021 now includes playdates with her amazing grandchildren, all pre-school age, and some golf and pickleball, new found hobbies!

Daily reads: The Daily SKimm, West Side Rag, NYTimes, and “it takes guts to admit this but The New York Post which might be related to my love of mysteries and thrillers, not to mention the tackiest headlines in the world”.